Why Do We Need Humility?

Mankind sometimes admits that humility is a wonderful quality. But the world in general has little esteem for what it considers a humble or meek person, since it believes that men are small material entities, each one possessing a mentality of its own. Christian Science teaches and demonstrates that Mind and its idea, man, is all that really exists, and that man is a compound idea, reflecting all that Mind knows. In the light of this teaching, humility is seen to be a state of thought which has been so enlightened through a desire to know what is true about God and His creation that it is willing to give up its false sense of self, along with preconceived ignorant beliefs, for the truth that man is Mind's perfect idea, inseparable from God, and incapable of doing anything by itself.

A mortal may claim humility, but it is really nothing but human pride if it says: "See how lowly I am! I am humble indeed. Tread on me if you will." Beware of this counterfeit, for it is but the precursor of a fall. Does not the Bible say (I Cor. 10:12). "Let him that thinketh he standeth take heed lest he fall"? 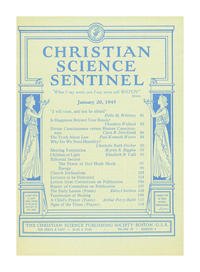