I go to the Christian Science Wednesday...

After school one afternoon it was very hot, so I thought I would go for a swim. I was swimming about in the baths, having a lovely time and diving off the boards. Then I dived off the high board again, which is about as high as a telegraph pole, and hit the bottom. I did not notice that some boys had been playing with the pipes at the other end of the baths and the water had gone down three or four feet. That was why I hit the bottom. When I came up everything was black, but after a while I could see. The manager wanted to take me to the first aid post, but I insisted on going home. On my way I met my mother, so we went home and knew the truth. Then I went to sleep. When I woke up I was quite all right. All the error had gone, and I was so happy. I had something to eat and felt lovely. But when I woke the next morning I was giddy. I had been so happy I had forgotten to do my protective work. So I got in touch with a practitioner and she did some work too. In no time all the giddiness was gone, and so was the lump on my head. I have been all right ever since.

Send a comment to the editors
NEXT IN THIS ISSUE
Testimony of Healing
Because I have learned that... 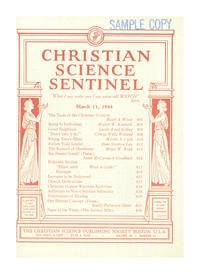