Often one is tempted to turn backward in thought to contemplate past pleasures or pains and to dwell longingly or fearfully, as the case may be, upon them. So Lot's wife, contrary to the command of God, looked back upon the evil cities from whose destruction she and her husband were being delivered. As a result of this disobedience she was turned to "a pillar of salt." May not this pillar of salt symbolize the bitterness and oftentimes the stubbornness of mortal thought, which insists upon dwelling on past evils, past fears and failures? Is there danger of our becoming pillars of salt, forgetting the living present, while mentally gazing upon a depressing past? Jesus said, "Follow me; and let the dead bury their dead." In other words, let a false sense of a past be put aside for the present reality—the constant appearing of the living Christ to the human consciousness.

The admission, "I have tried hard to overcome my problem, yet it has been with me for such a long time," would in belief agree with error's argument that it has a past or a history, and therefore has built up some sort of foundation or prestige in human thought. But our revered Leader, Mary Baker Eddy, in her book, "Science and Health with Key to the Scriptures," promises (p. 353), "When we learn that error is not real, we shall be ready for progress, 'forgetting those things which are behind.'" A student of Christian Science does well to obtain a clear perception that "now is the accepted time" for the manifestation, of his spiritual identity, which eternally reflects dominion over every false concept that, to human sense, haunts so many yesterdays. 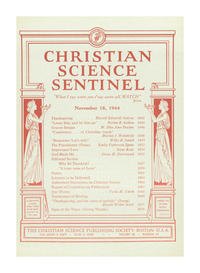