[From a Christian Science Wartime Minister]

An aviation cadet suffering from rheumatic fever was sent to a naval hospital. All soreness and swelling disappeared in three or four days after Christian Science treatment was started. The doctor ordered him to remain six weeks in the hospital to guard against "aftereffects," and he was told that at the end of that time he would be examined and his discharge from the service recommended, as the aftereffects would prevent his becoming a naval aviator. 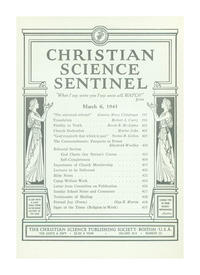