I should like to express my gratitude for Christian Science. I was introduced to it by the writer of the previous testimony, nine years ago, at a time when all medical aid had been tried and failed.

I was a hopeless sufferer from tuberculosis, and I believed my only hope of relief was in death. I also suffered at this time from shell shock. I had always been a reader of the Bible, having been a Sunday school teacher in an orthodox church for a number of years, and when I was told that the promises in the Bible were for the present (not only for past and future) I realized I had found something for which I had been looking. I then determined to study the textbook of Christian Science, "Science and Health with Key to the Scriptures" by Mary Baker Eddy, or at any rate to investigate it. That night I had my first good sleep for months. I was freed from the nervous disorder and have not had a recurrence since, proving that "the word of God is quick, and powerful, and sharper than any two-edged sword." 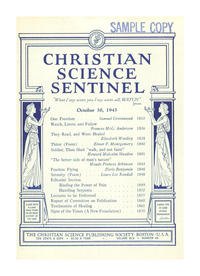