No Continuity to Evil

The human mind, believing as it does in the reality of evil, quite easily acquires the habit of expecting and prophesying the continuity of evil conditions such as disease, famine, war, pestilence, and so forth. Because of this tendency, those who depend solely upon a fallible, finite sense of intelligence for guidance frequently find themselves agreeing with predictions that discordant conditions will continue for an indefinite time.

It is often predicted by medical doctors and by those who have been educated along medical lines that some conditions of disease will continue for a certain period, and that there is no way of preventing them from doing so. But this sort of thinking was proved erroneous by Christ Jesus when he instantly healed the man at the pool of Bethesda who had been ill thirty-eight years, and the woman of whom it is recorded in the Gospel of Matthew that she had been twelve years in the abnormal physical condition from which Jesus freed her by means of spiritual power. 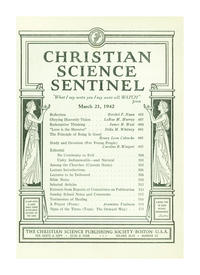