A group of Christian Scientists organized first as a Christian Science Society, and later as Fifth Church of Christ, Scientist, Kansas City, authorized branch of The Mother Church, The First Church of Christ, Scientist, in Boston, Massachusetts. They began to hold services in Ford's auditorium, southwest corner of Prospect Avenue and Twenty-seventh Street, in March, 1914. Then in February, 1915, they moved to Prospect Hall, at the southwest corner of Twenty-second Street and Prospect Avenue, where they remained for six years. The Masonic Temple at Twenty-sixth Street and Jackson Avenue, was the next location, which was used until May, 1925. Then temporary quarters were obtained in Submarine Hall, at the southeast corner of Thirty-first Street and Prospect Avenue, where services were held for three months until they moved to their present location. 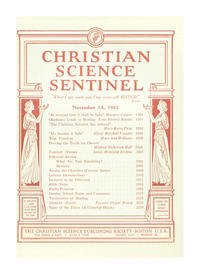