As the young man proceeded with his testimony, there came to the thought of one listener the definition of "angels" given us by our Leader, Mary Baker Eddy, in "Science and Health with Keyto the Scriptures," which reads (p. 581), "God's thoughts passing to man; spiritual intuitions, pure and perfect; the inspiration of goodness, purity, and immortality, counteracting all evil, sensuality, and mortality," and he recalled the promise in the ninety-first Psalm: "He shall give his angels charge over thee, to keep thee in all thy ways. They shall bear thee up in their hands, lest thou dash thy foot against a stone." He realized how the Sunday school and the subsequent years of regular study, together with his constant dwelling with Truth, had enabled him to hear and recognize these thoughts from God, which had brought him protection and abundance. 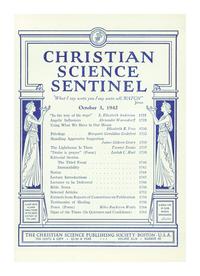