Forgetting and Reaching Forth

A spiritually perceptive student of Christian Science accepts its basic teaching that divine Mind is the only creator of the only universe which really exists. He recognizes that in the ever-presence of creative Mind there is no past and no future. The qualities of God understood as Mind or Principle or Truth are seen to be ever-present intelligence, undeviating perfection, completeness, invariableness, and their like. These qualities could not cease to be, creating a past; nor could they start at some time to come, creating a future. In the time-dream there seems to be a past consisting of good that has been lost and of evils that may repeat themselves. Considering only the latter phase of the belief of a past—that of the return of unhappy experiences—it would be difficult to estimate the benefit to be derived by humanity from literal obedience to the Pauline command to forget "those things which are behind."

The past claims to dictate what the future shall be. It seems to whisper, "You were sick; you were poor; you did have an accident." Is not the corollary to this, "You may again be sick; you may again be poor; you may have an accident"? How different the process with the student of music! If as a beginner he played false notes, he would smile at the suggestion that after years of study and practice he would be likely to strike the combination of notes which had formerly produced discord. The fear of reverting to past mistakes which have been assiduously corrected by study and practice is rare among the students of language, music, mathematics, or chemistry. Why, then, should the student of Christian metaphysics often seem hampered and haunted by fear of repeating past mistakes of disease or sin which he has worked earnestly to overcome? Is it not because none of these human forms of knowledge have the power to destroy disease, evil, or death? Because the so-called natural sciences leave fear and hate and the belief of matter in general undestroyed, acquiring them encounters less active opposition from what is termed, in Christian Science, animal magnetism. This is descriptive term for all that seems to draw in the opposite direction, away from Spirit's eternal attraction.

Send a comment to the editors
NEXT IN THIS ISSUE
Article
"Having eyes, see ye not?" 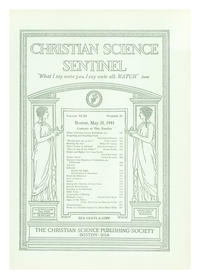