"Pray for the prosperity of our country, and for her victory under arms; that justice, mercy, and peace continue to characterize her government, and that they shall rule all nations." So wrote Mary Baker Eddy (Christian Science versus Pantheism, p. 14) in 1898, at the time of the Spanish-American War. Her words are of interest to all Christian Scientists who may be considering to what extent and in what sense they are justified in praying for victory when their country is at war.

That such a question should be raised at all shows how the religious sense of mankind has developed. Primitive peoples are apt to regard their gods as superhuman tribal chiefs whose duty it is, and for whose personal prestige it is almost necessary, to exalt their own tribes in power and wealth and give them victory over other tribes. But the crude petitioning which results from such false standards is seen to be utterly inadequate and out of place when God is recognized as the only God, holy, just, impartial, as the Father-Mother of the spiritual universe, as the divine Principle, Love. As a truer concept of God unfolds, so does a truer concept of prayer, and also of victory. 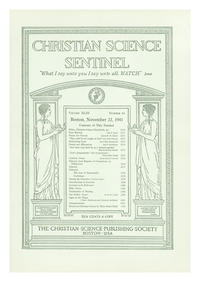