With a deep sense of gratitude I wish to give this testimony...

With a deep sense of gratitude I wish to give this testimony of the healing efficacy of Christian Science. I had known of Christian Science for years, but had scoffed at what I thought it to be. In 1920, after a case of influenza, I experienced severe headaches that came on morning about half past nine, and lasted until about four o'clock in the afternoon, eventually becoming very severe. I consulted two doctors in the town where I lived and tried numerous patent remedies. Then my sister suggested that I try Christian Science. I decided to do so. It seemed a good time to find out about it, so I visited a practitioner, talking with her for about fifteen minutes. When I left she gave me some references in the textbook, Science and Health by Mrs. Eddy, to read before retiring, and I spent fifteen or twenty minutes reading them. From that day to this I have never had another headache.

I was later healed of the results of a fall of twenty-six feet. I landed on my face and hands. My wrists were so badly strained that I could not lift a hatchet with both hands. This occurred about half past ten on a Tuesday. I called on a practitioner for help, and returned to work the following Friday and helped run the derrick that day (I am a derrick or rig builder by trade). At another time, while suffering from fever caused by smallpox, I was relieved within an hour and fell soundly asleep. I arose next morning, and returned to work in about ten days.

Send a comment to the editors
NEXT IN THIS ISSUE
Testimony of Healing
In the year 1918, I spent a month's holiday with some... 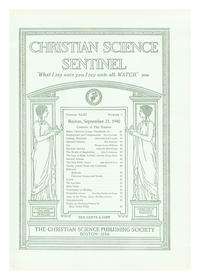