In gratitude for the many healings received through the...

In gratitude for the many healings received through the help of Christian Science I give this testimony, hoping it may encourage others to heed the injunction, "Let this mind be in you, which was also in Christ Jesus."

In 1934, at the invitation of friends, I attended a Christian Science lecture in a near-by town, and while listening to the messages of Truth, I received a healing of a physical condition from which I had suffered for over twelve years. In 1930, a physician had advised an emergency operation, but I had refused it, owing to my lack of faith in that method, though I knew nothing of Christian Science then. Also at this lecture I enjoyed hearing of incidents relating to Mrs. Eddy told by a former member of her household, whereas formerly I had felt a sense of resentment at the mention of Mrs. Eddy's name.

Send a comment to the editors
NEXT IN THIS ISSUE
Testimony of Healing
In 1921 I was in a wretched condition mentally, physically,... 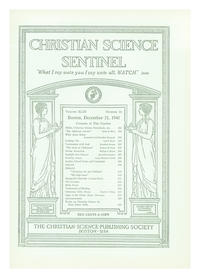