Before coming into Christian Science I often helped my...

Eugenie Weber with contributions from Eugene B. Weber

Before coming into Christian Science I often helped my husband, who was engaged at that time in the drug business. During his practice he had come to the conclusion that the only power medicine appears to have is what human thought gives it. He knew of the results some of our friends were getting through Christian Science, but he did not know what it taught. Some of our Christian Science friends sent sample copies of the literature to him, but these I quickly destroyed. I was the daughter of a minister, and believed them to be wolves in sheep's clothing.

At that time I had a small tumor on my upper arm, which was removed upon the advice of a physician. Although the report from the laboratory was "nonmalignant," in about six months the condition appeared again. The arm became very sore, as well as the whole left side, and specialists advised radium treatments, of which I had seven. Then they advised X-ray treatments. In spite of all, the arm became worse, so that the doctor recommended removing the tumor again, but I refused to have this done.

Send a comment to the editors
NEXT IN THIS ISSUE
Testimony of Healing
I shall ever be grateful to God and to Mrs. Eddy for.... 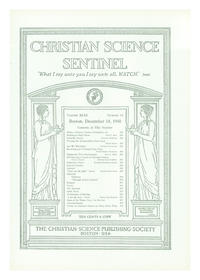