"Confounded be all they that serve graven images, that boast themselves of idols" (Psalms 97:7)—A more literal translation of the Hebrew word "yeboshu," here rendered "confounded," would be "ashamed," while the term which is translated "idols" comes from a root which means "weak, feeble, poor, worthless, insufficient" (cf. Brown, Driver, and Briggs: Hebrew Lexicon). Thus Smith suggests: "All who serve wrought images are put to shame, they who prided themselves on their nonentities;" though Moffatt prefers: "All worshippers of images were confounded—so pround of their empty idols!"

"Light is sown for the righteous" (Ps. 97:11)—This is a literal rendering of the Hebrew text as we have it today; but from the evidence of the Septuagint, the Syriac, and other early versions, it is very probable that at some period a copyist wrote down "zarua," instead of the original "zarach," which means "appears or rises," a word often used with reference to the rising of the sun, as for example in Psalms 104:22 or Job 9:7. Hence Moffatt's rendering: "Light dawns for the just;" and that of the Septuagint: "Light is sprung up for the righteous;" though Smith prefers to retain: "Light is sown for the righteous." (Compare Kittel: Biblia Hebraica, Footnote on page 984; and Brown, etc., op. cit., p. 281.)

Send a comment to the editors
NEXT IN THIS ISSUE
Testimony of Healing
My heart overflows with gratitude for the constant,... 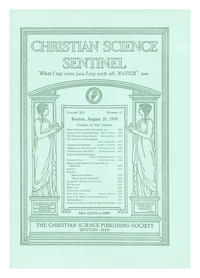