Fenton, Michigan (Society).—The history of the Christian Science movement in Fenton began about fifty years ago, when a Christian Scientist from the West came to Fenton to live. Through the healing and helpful work done, interest was aroused and for several years a small group held Sunday services in private homes. In the year 1899 a Christian Science Society was formed and services were held in the Ladies' Library room downtown. These services continued for seven years—until December, 1906. During this period two Christian Science lectures were given. Then, for many years after, the Lesson-Sermons from the Christian Science Quarterly were read on Sundays at irregular periods and in different homes.

In December, 1933, a few who were interested, and in earnest, rented a small room at 502 South Leroy Street, and began holding regular Sunday morning services which were open to the public. The room was also used as a Reading Room. The attendance grew, and in November, 1935, the present Christian Science Society was organized. A Sunday school for pupils up to the age of twenty was opened in March, 1936, and in April, the first Wednesday evening testimony meeting was held. In September a building fund was started. In October of that year the society rented a house at 609 South Leroy Street, which had been remodeled to meet the needs of the society, and to provide more room. 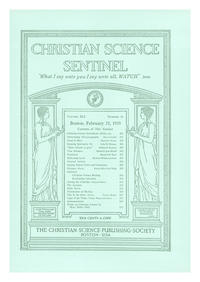