Two young students of Christian Science—a brother and sister—were running along the beach. Suddenly the young man dashed into the water and beckoned to his sister to follow. "Come on—let's ride the waves," he shouted above the boom of the surf. They were both good swimmers, and she followed unhesitatingly.

The waves were rough, and until the pair reached water sufficiently deep to enable them to swim, they were constantly thrown by the strong undertow. Finally, the brother struck out boldly, and as each incoming wave broke, the girl watched him riding right over the crest, and gliding down on the other side of the wave. It looked so simple that she decided to try it too, but her efforts were not so successful, and she did not particularly enjoy her experience of being buffeted about by these mighty waves. Seeing her difficulty, her brother swam back, and said: "Your trouble is that when you see a wave coming, you become frightened by its size, and instead of riding over the top of it, you try to buck it; consequently you go through the wave, and it throws you. The next time one comes along, ride over the top. It's wonderful!" 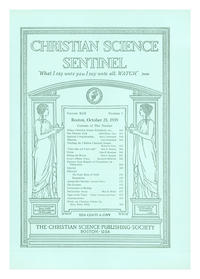