"Not two bases of being"

It is a significant fact that, down through the ages, prophets and spiritual teachers have all voiced again and again the same important message to mankind, namely, the oneness of God and the consequent nothingness of anything unlike Him. "Hear, O Israel," said Moses: "The Lord our God is one Lord." "I am the Lord, and there is none else, there is no God beside me," said Isaiah. On page 279 of "Science and Health with Key to the Scriptures" by MaryBaker Eddy, we read, "A logical and scientific conclusion is reached only through the knowledge that there are not two bases of being, matter and mind, but one alone,—Mind." Theoretically we all accept the statements made above. We speak of ourselves as monotheists, and as Christian Scientists we unhesitatingly subscribe to the First Commandment in the Mosaic Decalogue. Yet, if we watch our thinking, we discover that much of the time we have departed in thought from our original basis, God, good, Spirit, and have accepted another, which is evil and material.

What would be thought of a mathematician who reasoned from the premise that two times two makes four in one problem, and that two times two makes five in the next? Yet much of our thinking is equally illogical unsound. unsound. In one instance, when we are in need of physical healing, we declare ourselves to be Godlike, the image of Mind, and therefore well and whole, and in the next we may aver that we have never been able to understand mathematics, or logic, or languages, or whatever seems to constitute a difficulty to us in our school studies, thereby virtually admitting to ourselves that we are governed by a mortal mind which is limited, and lacking in some necessary ability. Perhaps we may always try to think of ourselves as children of God, of Love, protected, cared for, and blessed by a loving Father-Mother, yet sometimes do we not feel that we are not able to make friends, that we are shy, timid, or self-conscious, lacking somehow in the qualities which draw people to one? We even appear to drift so far away from our divine basis when listening to these false arguments that we are led to believe that material aids, such as social drinking or the smoking of a cigarette will assist us in forgetting ourselves, in being more at ease, and that thereby we shall make friends. We like to think of God as our Father-Mother when we seek His guidance and provision for our daily needs, but at the same time we refer to ourselves as human beings, with characters which have to be made over, with inherited tendencies, or racial traits to struggle with. 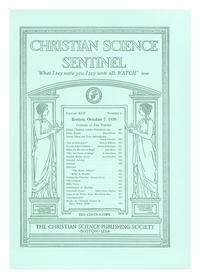