Over forty-five years ago I heard of Christian Science,...

Over forty-five years ago I heard of Christian Science, and became curious enough to investigate it. I was seeking the truth. I had renounced the God of my fathers, and crossed into a wilderness of agnosticism—ever seeking and following new lights; but all had proved will-o'-the-wisps. I heard that Mrs. Eddy's book could be bought for five dollars. I was not too poor, but too stingy, to pay that much for a book; but as I heard that she got it from the Bible I commenced an intensive study of the New Testament, which profited me greatly. Then I heard of Christian Science meetings being held in a private home. My experience with these Sunday afternoon meetings covered a short period of time and proved interesting; but my infant understanding became slightly discouraged and maybe prejudiced against Mrs. Eddy, because of the disloyalty of some of those who attended the meetings.

Then, thirty years ago, "Science and Health with Key to the Scriptures" by Mrs. Eddy was lent to me. I was hungering and thirsting for the truth it contained, and devoured the book. I made many demonstrations of healing in my family of children, which proved to me that I had found the truth. A branch of The Mother Church in Boston had been started in our city by that time. I soon became a member, and I also became a member of The Mother Church. I had the privilege of class instruction in Christian Science in 1910.

Send a comment to the editors
NEXT IN THIS ISSUE
Testimony of Healing
One winter I had a glorious proof of divine Love, which... 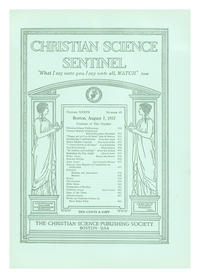