A Lesson from Ham

While reading the narrative of Noah and his sons, contained in the ninth chapter of Genesis, a student was impressed by the difference in the attitude of one son and that of his two brothers in respect to the father's sin. These verses were reread several times with the question, "Why was Ham cursed, and why were his brothers blessed?" Finally the answer came, "Because Ham saw the evil as real and went out to tell it to others, thus magnifying the sin in his own thinking." Mark the different attitude of the two brothers Shem and Japheth. Their refusal to admit the evil into their thinking brought a blessing. Is it to be wondered that Noah blessed them? Would not anyone bless a friend who took steps to protect him from the mesmerism of pleasure in evil? And many at some time in the journey from sense to Soul need such protection.

Through his obedience to God, Noah had saved himself and his family from the flood, and yet afterward, momentarily at least, had succumbed to a false appetite. Malicious mesmerism may attempt to bring about the downfall of one who has succeeded in some large project, or has been successful in overcoming some error through Christian Science healing. The attempt is to overthrow good wherever it is expressed. Perhaps the first flush of some victory leaves thought unguarded, and aggressive suggestion, operating, it may be, through some unhealed trait, enters consciousness. 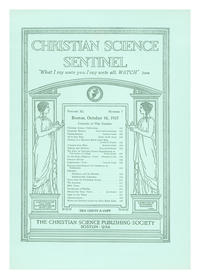