There is hardly to be found anywhere in the Old Testament a more comforting and encouraging group of admonitions than that in the fifty-forth chapter of Isaiah. These inspiring words were addressed to a people seemingly disheartened and crushed. The Hebrew nation had been overwhelmed with one disaster after another until it appeared as though its inevitable lot was to encounter only trials and difficulties.

Yet, in the midst of such dark hours, the prophet, faithfilled and spiritually exalted, could speak to his people with the fervency of inspired utterance. He told them to be unafraid, assuring them that in righteousness they would be established, and that they would become free from oppression. Not only this, but he gave them positive instruction to expand the scope of their activity. "Lengthen thy cords, and strengthen thy stakes"! How wondrously grateful must have been those discouraged people to hear the words of one who was so courageous and so endued with the vision of God's power to overthrow the workings of evil! They were told to enlarge the place of their tent, lengthening the cords which braced these tents, and strengthening the stakes to which the cords were fastened. Accordingly, both processes were essential. 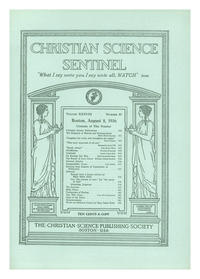