Why Are We Christian Scientists?

IN the sixth chapter of John's Gospel are related the following incidents. At the Master's command a multitude of five thousand had been fed with five barley loaves and two small fishes, and the disciples had gathered up and filled twelve baskets with the fragments which remained. Later, Jesus, walking toward them on the sea, had joined his companions whose ship was buffeted by the wind. "And immediately the ship was at the land whither they went." Then there came a large group of people seeking for Jesus, curious to know how he had come to Capernaum. Jesus' reply is significant: "Verily, verily, I say unto you, Ye seek me, not because ye saw the miracles, but because ye did eat of the loaves, and were filled."

Seeking Christ, Truth, for the loaves and fishes instead of for an understanding of the power which produced the miracles is not confined to the era in which Jesus lived. Even quite young Christian Scientists who have never been associated with any other religious teaching than that of our Leader, Mary Baker Eddy, can be said to be seekers of the loaves and fishes if they are not striving to gain and apply for themselves an understanding of the divine Principle which underlies this teaching. 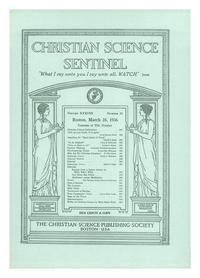