Before he uttered the momentous words, "Lazarus, come forth," Jesus required those who were with him to take the stone from the door of the tomb. In this simple act there is a lesson for all Christian Scientists. Note that Jesus did not remove the stone himself, but directed those who believed Lazarus to be dead to remove the stone. May not the stone represent the imprisoning belief of life in matter and its corollary, death in matter, "the last enemy" which is to be destroyed, the belief which all must overcome in order to prove that life is spiritual and eternal?

In the detailed record of many healings Jesus demanded something of the one healed. The man with the withered hand was required to stretch it forth, "and it was restored whole, like as the other." At the pool of Bethesda, Jesus said to the man "which had an infirmity thirty and eight years," "Rise, take up thy bed, and walk." He instructed the ten lepers to go and show themselves to the priests, and as they went they were cleansed. 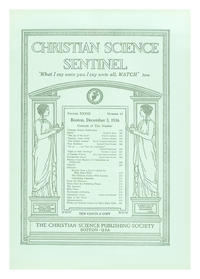