In last Thursday's Eastern Daily Press, under the subtitle...

In last Thursday's Eastern Daily Press, under the subtitle "Crank Beliefs," a writer enumerates Christian Science, among others, as freak religion. The article is doubtless meant to be taken lightly and in a humorous vein, as, indeed, it will be taken by a majority of thinking and observant people; but for the sake of some who may only see a sneer in his remarks, may I point out that Christian Science, far from being a freak religion, is the religion our Master, Christ Jesus, taught to his disciples in its primitive simplicity, and in healing the sick and sinning in their thousands, as it has done and is doing, it is proving "with signs following" its right to be so understood.

In Jesus' day his teachings were not accepted by the theologians of the time and were looked upon as strange. 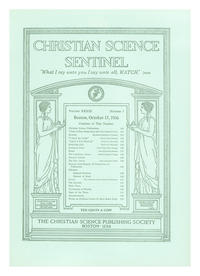