ALMOST all mortals are in pursuit of something which they think will bring them happiness. They seek this something through different avenues: sometimes through wealth, sometimes through social position, and possibly most often through a sense of greatness and power. Indeed, fame and prestige in human relationships seem to be regarded as particularly desirable goals. Yet many times, having attained positions of prominence and so-called power, individuals find themselves far from satisfied. Nearly always there is a bitter drop in the cup which promised to be so sweet. Beliefs of envy, jealousy, or malice on the part of others may mar the joy of achievement. The situation may bring about a sense of isolation, or a sacrifice of personal ties which are supposed to contribute to happiness and contentment. As a rule, it is not until human beings are instructed in divine Science that they find real happiness or know what it means to be truly great.

Jesus knew that the acclaim of the multitude was but the fickle, shifting tide of human belief, and that his greatness lay in his oneness with divine Mind and in the consequent humility which meant the absolute effacement of the mortal self. Paul wrote to his friends at Philippi, "I count all things but loss . . . that I may win Christ;" while in a terse sentence in "The First Church of Christ, Scientist, and Miscellany" (p. 194) Mrs. Eddy states that "only those men and women gain greatness who gain themselves in a complete subordination of self." 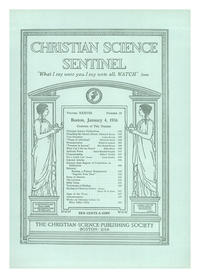