It seems a proverbial trait of the human mind to look outside of itself for the correction of its discordant experiences. Sometimes it blames others, or conditions, for its own shortcomings. Of old the high priest confessed the sins of the children of Israel, putting them on the head of a scapegoat and sending him into the wilderness. A scapegoat is defined thus: "A goat upon whose head were symbolically placed the sins of the people, after which he was suffered to escape into the wilderness. Hence, a person or thing bearing blame for others." From the story of the scapegoat recorded in the sixteenth chapter of Leviticus have been derived the slang phrases, "I'm the goat," or, "You're the goat," meaning the individual who bears "blame for others" or is the victim of some evil circumstance. But many who have never read the story of the scapegoat or used the above-mentioned slang expressions may feel that their lot is especially hard, their problem unyielding, or their environment particularly difficult.

But we should not be the victims of evil conditions, for the way out of troublesome situations has been revealed in Christian Science. This way is through the uplifting or spiritualizing of one's own thinking; through acknowledging as real only that which comes from God, good. Paul did not say that association with certain friends or a change in position or location would of itself bring us peace; but he did say, "To be spiritually minded is life and peace." 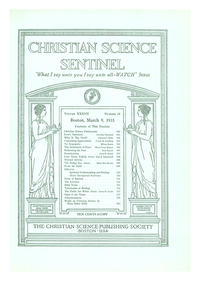