In a recent article entitled "The Holy Presence," which...

Merrill M. Hutchinson, Committee on Publication for the State of Georgia,

In a recent article entitled "The Holy Presence," which appeared in the Macon Telegraph and News, the writer brought out in a most gratifying manner how the power of God's presence transforms the thinking and lives of mankind. Mentioning a number of specific instances, the writer showed clearly how each one, right here and now, by not being conformed to this world, but by being "transformed by the renewing" of his "mind," had proved "what is that good, and acceptable, and perfect, will of God."

Kindly allow me to make a little more clear how the Christian Scientist glimpses the future, as well as endeavors to make the most of the present. As in the science of mathematics there is always something ahead of the mathematician beyond what he has worked out and proved, so in the Science of Christianity there is always infinitely more ahead for the spiritually-minded one beyond what has been successfully demonstrated. In the realm of the real, the spiritual, there is constant and joyous unfoldment. That clearly implies progression, for "progress is the law of God," as Mrs. Eddy states in the Christian Science textbook, "Science and Health with Key to the Scriptures" (p. 233). The vacillations of the human mind are not to be found in the immortal man, made in the image and likeness of God. As we read (ibid., p. 258), "God expresses in man the infinite idea forever developing itself, broadening and rising higher and higher from a boundless basis." 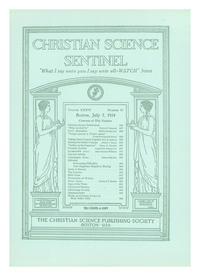