Will you kindly allow me space to comment briefly on a...

Will you kindly allow me space to comment briefly on a clergyman's criticism of Christian Science in your last issue? He quotes a sentence from page 35 of Mrs. Eddy's book "No and Yes," to emphasize his objection to her teaching "that sin is unreal." Unfortunately, he does not give the context, which plainly shows the premise from which she draws her conclusion. The passage reads as follows: "Jesus came announcing Truth, and saying not only 'the kingdom of God is at hand,' but 'the kingdom of God is within you.' Hence there is no sin, for God's kingdom is everywhere and supreme, and it follows that the human kingdom is nowhere, and must be unreal."

A very clear and definite distinction is made in Christian Science between the real and the unreal. All that emanates from God is real and is eternal; the unreal is described by St. John in these words: "The lust of the flesh ... is not of the Father," and it "passeth away." Christian Science does not minimize the awful consequences of sin, but it encourages the sinner to rise above sin by realizing the allness and omnipotence of God, good, and knowing that sin is no part of His creation.

Send a comment to the editors
NEXT IN THIS ISSUE
Article
Please allow me space in your valuable paper to make a... 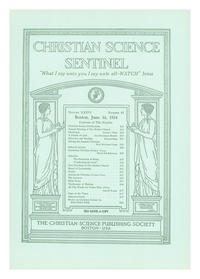