The Kingdom That Comes in Right Thinking

THE New Testament tells us of the Mind that was in Christ Jesus, and shows us that to this consciousness the kingdom of God is spiritual, ever present perfection, the sole reality. The carnal mind, also, is there exposed, with its belief in a kingdom of matter and evil, supposedly as real as the spiritual kingdom. Jesus described "the devil," evil, and its errors as "a liar, and the father of it." He said, again, "The kingdom of God is within you;" and he exposed the supposititious kingdom of evil as having no power, no presence. Thus one is seen as fact and the other as falsity.

Human thinking commonly professes that the kingdom of matter is the present reality and the kingdom of Spirit is of the future. Such profession belongs to "this world" of sin, sickness, sorrow, and death. By such belief righteousness, wholeness, harmony are supposedly relegated to the remote "hereafter." Jesus found wrong thinking of this kind, and corrected it by proving God's kingdom to be at hand. By healing all kinds of disease, overcoming lack and limitation, mastering sin and death, he demonstrated the immediate and tangible expression of spiritual power. He denounced methods that ignored wrong mental conditions and dealt primarily with physical situations and environment. This process he likened to cleaning the outside of the vessel, while within all was corrupt. Applying this teaching further, he affirmed that it is not what goes into the body that defiles, but what comes "out of the heart." To evil thoughts he attributed lust, murder, theft, lying—all manner of evil. Again, he proved the power of right thinking over all sorts of error, and showed it to be available for every follower of Truth. 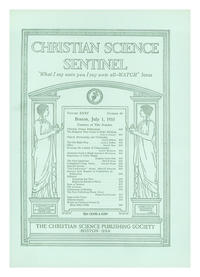