This is analogous to the general belief as to the nature or value of good and evil, Truth and error. As the positive quantity in mathematics cancels an equal negative quantity, so good and evil are supposed to be of equal rank and in continual opposition, neither being predominant over the other. The Bible declares, "The Lord he is God; there is none else beside him," and, "God saw every thing that he had made, and, behold, it was very good." On the basis of these Biblical statements, Christian Science contends that God, good, is infinite, All, and that evil is nothing, its apparent existence being an illusion. So evil in all its ramifications is seen to be but the supposititious absence of God, ever present Love, a denial of His omnipotent goodness. Thus Christian Science builds its structure on the entireness and supremacy of God, the unity of good, and recognizes no negative or opposite of good as having power or reality. Evil, no matter how aggressive or persistent its claims, stands in the same relation to good, or Truth, as does the negative quantity to the positive in mathematics. 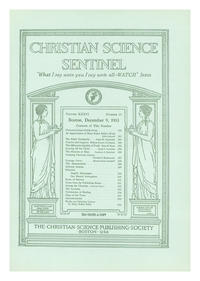