I have read with interest the review of two biographies...

I have read with interest the review of two biographies of Mary Baker Eddy, by Miss Sibyl Wilbur and Lyman P. Powell, D. D., respectively, which appears in your issue of July 28. As the review contains several statements which require correction, I shall be grateful if the courtesy of your columns can be extended to me. The review can hardly be termed an impartial one, and it is to be regretted that the writer should deem it necessary to introduce into it material taken from works whose authors had gleaned their information from sources which cannot possibly be authentic.

Mrs. Eddy was a consecrated and devout Christian, an earnest student of the Scriptures; and the Christian Science textbook, "Science and Health with Key to the Scriptures," was the outcome of years of patient and consecrated study of that sacred volume. The assertion that she regarded herself in the light of a deity is untrue, and the very reverse of her teachings. Such statements are as offensive to Christian Scientists as they would be to other Christians. She exhorted her followers, "Follow your Leader, only so far as she follows Christ" (Message to The Mother Church for 1902, p. 4). Mrs. Eddy's character was just the reverse of that painted by those who would discredit her. Those who knew her best speak of her kindness, gentleness, tenderness, true humility, and unfailing courtesy in her dealings with others. She cared little for wealth, and the fortune which came to her resulted from her own labors. During her lifetime she made many generous gifts to public institutions. The bulk of her fortune she left to The Mother Church in Boston for the advancement of Christian Science.

Send a comment to the editors
NEXT IN THIS ISSUE
Article
If the correspondent who signs himself "Interested,"... 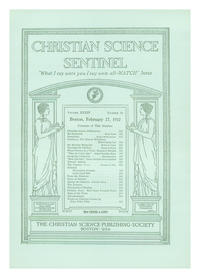