"Forgetting those things which are behind"

When much that has seemed humanly desirable has passed, and the happiness and joy which a short time before filled one's cup of happiness to the brim have apparently ceased to be a part of one's experience, existence may seem useless and barren, and human sense may argue that there is little left for which to strive. It suggests that all good has been, but is now ended, and that the prospect is dull and cheerless, dark, cold, and lonely. How the heart turns back to the happiness of the joyous past, heavy with the belief that the same happiness can never come again, and that certainly no other joy could ever equal it! Looking longingly backwards, mankind sometimes centers its thought on these things of the unreturnable past, which, however dear they may have been, are not a part of to-day's structure. They were in fact only channels for the expression of good; and good, derived from God, is unending.

Perhaps one's loss has looked like tragedy, failure, reversal of demonstration, even death itself. So did the crucifixion of Jesus. Was there ever a greater tragedy, a more colossal failure, a more complete reversal of demonstration of Truth, a more ignominious death? Never in the history of the world has there been a death which to the eyes of all onlookers seemed more shameful, more cruel, than the one on Calvary's hill when he who had brought the light of Truth to the world hung nailed to the cross, with a thief on either side. Never has any man seen a more complete seeming reversal of his life's work than did Jesus when he was crucified before the very throngs to which he had preached the good tidings of life eternal, whose sick he had healed, whose hungry he had fed, whose so-called dead he had restored to life. To those looking on, even to his beloved disciples, whom he had so patiently taught and endeavored to prepare for this very event, this appeared to be failure, reversal, and death. But it was out of the overcoming of this experience that the resurrection and ascension grew. The veil of gloom and sorrow, doubt and unbelief, sought to hide the glory and beauty of the risen Lord. Yet it did not for a moment mar this glory or touch the Christ, Truth, for Jesus rose from the grave, his proof of the radiant reflection of Love being immeasurably enhanced by the triumph over affliction. 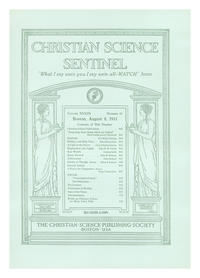