What Must I Do?

The jailer at Philippi who had the custody of Paul and Silas put to them as Christian missionaries the practical question, "What must I do to be saved?" Their answer, "Believe on the Lord Jesus Christ," was a good one as far as it went, and Luke's account of this incident (Acts 16:25—34) implies that they said more than this. Since then, however, a great many persons have believed on Jesus—have believed on him as the Christ, or even as God—but have not been "saved" in the full sense of this term. It is said that the original words for "save" and "salvation" in both parts of the Bible denote and include deliverance, healing, preservation, safety, soundness, and wholeness. As one authority (Scofield) has said, "Salvation is the great inclusive word of the Gospel." So the question continues to-day, What must I do to be saved from all the different aspects of evil?

Mrs. Eddy has construed in two ways the answer given by Paul and Silas to the jailer at Philippi. She has construed it as being equivalent to a precept which Paul afterward sent to the church which had been formed there; that is, "Let this mind be in you, which was also in Christ Jesus" (Philippians 2:5). She has also construed their answer, in her own words, as requiring us "so to understand the beauty of holiness, the character and divinity which Jesus presented in his power to heal and to save, that it will compel us to pattern after both." (See "Miscellaneous Writings," p. 197.) To be saved, then, we should not only comprehend "the character and divinity which Jesus presented" by his Christian works, but also we should do this so earnestly that we too will assimilate and demonstrate the divine nature. 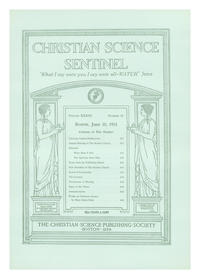