The words "I am thy God 'with whom is no variableness,...

The words "I am thy God 'with whom is no variableness, neither shadow of turning,'" came to me with such a degree of unfoldment and healing power, that I am constrained to tell of it as further evidence of God's loving, saving grace. Some thirty-eight years ago I met with an accident to my lower left limb, causing what the doctors called an indolent ulcer, which, according to their testimony, had already eaten its way to the main artery. As their efforts to check it were unavailing, they suggested that the limb be amputated at the knee. Furthermore, they stated in substantiation of their theory that if left as it was it would always give me serious trouble, and that later in life I would lose the use of it altogether. The amputation, however, was not agreed to.In the meantime I had become interested in Christian Science, but it seemed rather difficult to rid my thought of the doctor's verdict that later in life I would lose the use of the limb. It so happened, also, that certain of the ills which beset me during a rather prolonged period of semi-invalidism, had settled in the left side. The crisis, however, came when, one evening after a long drive, I arose to leave the car and the most intense pain I had yet experienced fairly besieged the injured member. There was naturally some fear in my thought. On reaching my room I resolved, as on previous occasions, to overcome the condition with the truth as taught in Christian Science; but it seemed that the more I tried to realize the truth, the more intense became the pain, which by this had settled in the knee. The sensation was such that I feared the kneecap might go out of place, and feeling that my efforts to apply the truth were not sufficiently clear, much as I disliked making the concession to matter I felt I must hold it in place, at least until help could be reached. I was making an effort to do so when these comforting, healing words surged through my consciousness: "I am thy God 'with whom is no variableness, neither shadow of turning.'" The pain ceased instantly. My gratitude was boundless, not so much for the cessation of the pain, as for the uplifting sense of the divine presence which the message ushered in. Surely nothing but the divine power could have wrought such wonderful uplifting and healing in its loving rebuke.This occurred over eight years ago, and, although from the time of the accident I had suffered more or less from it, since the healing I have not had the least inconvenience from or painful sensation in the limb. I surely am grateful for the little I have gleaned from the study of Christian Science, and for the comforting assurance that it is always going on to heal and bless all mankind.(Mrs.) Dorothy Skinner, Los Angeles, California.

Send a comment to the editors
NEXT IN THIS ISSUE
Testimony of Healing
When a boy of fifteen I first heard the words "Christian Science."... 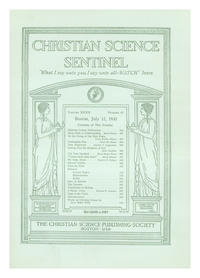