On page 1 of "No and Yes" by Mary Baker Eddy we find these words: "Truth is as 'the still, small voice,' which comes to our recognition only as our natures are changed by its silent influence."

When the individual commences the study of Christian Science, whether he be consciously aware of it or not, there is about to take place in his nature a great change. When the first glimpse of Truth dawns upon his awakened consciousness, the change has begun; but Truth's operation or influence being silent, the student may not realize for some little time that anything is going on. Gradually, however, he begins to notice that things and conditions are taking on a different aspect. He finds that his old viewpoints are changing and things are becoming, as it were, new. Thought is becoming cleansed and purified, and he sees that outward things are not what they once seemed. Step by step he learns that his nature is being transformed as a result of the leavening power of Truth silently at work in his consciousness. Perhaps his friends have noticed a change in him and have voiced their thought, thereby strengthening his own recognition of the regeneration which is now taking place deep down in his innermost being. 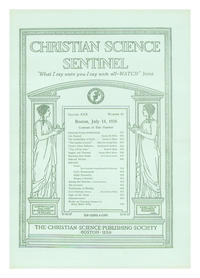