The eastern Magi possess an attraction which has permeated all the Christian church, because of the record of their appearance at the manger wherein lay the infant Jesus. All that is known of this episode is that "there came wise men from the east," who brought gifts. And this is the first record of the giving of Christmas gifts, an act which, spiritually considered, is an excellent example to follow.

The Magi belonged, it is surmised, to that class of their race which was studious and religious, learned in the arts and in the science of astronomy, through which, possibly, they discovered the star of Bethlehem. Spiritual intuition having uncovered to them the purpose of the star, they determined to follow it in order to greet the newborn child. When they arrived at Jerusalem and their mission became known, they were summoned into conference with King Herod, who asked them during the interview to report to him when and where they found the child. Here the spiritual discernment which had impelled them to search for the child warned them not to accede to Herod's request. After they had been led by the star to the infant Jesus they paid homage to him, presented gifts of "gold, and frankincense, and myrrh"—gifts due only to royalty; and then they departed by "another way" to their distant home. 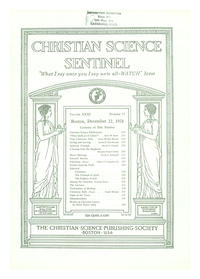