Mrs. Eddy, following obediently in the footsteps of Christ Jesus, iterates and reiterates the necessity for all seekers for the kingdom increasingly to rely upon God for strength, guidance, and sustenance. Emphatically does she point out that Christian Scientists must fully rely upon God in every thought and under all circumstances and, relying upon God, give Him all the glory. She especially enjoins her students to abstain from reliance upon diet, hygiene, baths, manipulation, or any material substance or method to restore or maintain health.

There are excellent Scriptural precedents for this stand. What an inspiring example of complete reliance upon God does Daniel afford! In captivity to a heathen king at Babylon, commanded to partake of the king's meat and wine to insure that at the end of three years he and his companions would be in proper condition to stand before the king, Daniel refused to eat and drink of the king's provisions, instead asking of the prince having him in charge that he might eat pulse and drink water. Although Daniel had found great favor with the prince, the latter feared the consequences if at the end of the appointed time Daniel and the others should not appear in proper condition. Upon request of the captives, however, and because of his great faith in Daniel, the prince consented to a trial period during which their diet should consist of nothing but pulse and water. "At the end of ten days," we read, "their countenances appeared fairer and fatter in flesh than all the children which did eat the portion of the king's meat." So clear was Daniel's vision, so thoroughly did he understand the source of life and health to be God, that he throve on the simplest of food. 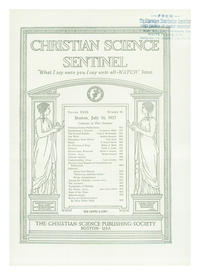