What a joyous vision the word "vacation" may conjure up to those toiling in the heated cities of the world, in crowded stores, in noisy workshops, in musty offices! What plans are made for long walks and lazy mornings, spent in listening to the cool lapping of the waves on the seashore; what eager discussions as to the best place in which to spend the precious leisure! Then, how often, disappointment seems to come instead of joy! So many things arise to interfere with the peaceful time that we intended to spend, and we return home with a sense of failure, a sense of having missed something; and we attribute this to the weather, to people with whom we came in contact, or, perhaps, to having made an unwise choice as to location.

May it not be that the failure to realize our joyous anticipation lies in the fact that the real meaning of a true vacation has not been understood; that we have been looking to matter instead of Spirit for refreshment; that we have been looking for merely physical recreation, and have not been seeking "first the kingdom of God," which alone can bring to us the true sense of joy and satisfaction? 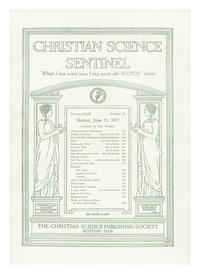