The history of the protective power of Christian Science could never be fully written. How often we are protected from the various ills "that flesh is heir to," without realizing the protection! How often it occurs that a student will be attacked by some evil suggestion, only to meet the wrong thought efficaciously with a declaration of the truth and an immediate denial! The evil is often thus met so quickly that it has no opportunity to manifest itself; and the incident is straightway forgotten. Do we not very often forget to be grateful for this protection? Had the error been allowed to take shape, say, in some form of disease, and afterward been healed by a knowledge of Truth, how grateful we should then have been! Yet, may not the first instance have been the greater demonstration of the power of Truth, and the greater cause for gratitude?

Some years ago a student of Christian Science was working in a laboratory when, because of the bursting of a flask, boiling acid splashed all over his hand. To plunge the hand into water would have been the work of a moment, but that would have meant the loss of a great deal of valuable work. The student, therefore, first made the rest of the apparatus secure, and afterwards washed off the acid. It was some days later that the realization came that no harm whatever had occurred, and that the acid had neither burned the hand, nor caused any other damage. It was also recalled that on other occasions similar accidents had resulted in very serious burns to operators; and immediately a great sense of gratitude for protection was felt. 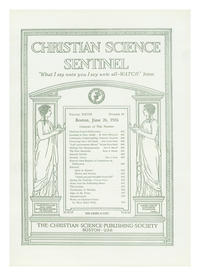