Every normal person desires freedom and light; but who is there who has not felt the darkness of a sense of bondage to fear, sickness, or some other ungodlike condition? That all have the right to be free is clearly elucidated in the teachings of Christian Science. The first words of God, according to the first chapter of Genesis, "Let there be light," have a tone of freedom which resounds throughout the Scriptures, and are similar to those in the last chapter of Revelation: "And let him that is athirst come. And whosoever will, let him take the water of life freely."

One reason why the stories of the Bible appeal to many is that people feel the experiences narrated there bear a strong resemblance to their own lives. In the twelfth chapter of Acts we read of Peter being thrown into prison for no reason except that Herod craved the applause of the people. It is interesting to note Peter's attitude toward Herod's persecution of him, and to ask ourselves what we should have done under similar circumstances. Imprisoned and chained, while soldiers guarded the outside of the prison, his position seemed hopeless; but it is in the humanly hopeless situation that the power of God is often seen the clearest. Though his position seemed perilous, we have no record that Peter sank into the slough of self-pity or resentment. Apparently he did not even exclaim, Why should I have this problem to solve? The right thinker resists the temptation to feel sorry for himself, because of his confidence in God's protecting care. It should be as reasonable to feel sorry for God as for His image and likeness, man. 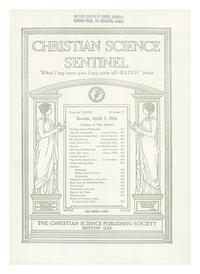