Permit me to refer briefly to the implication, made by a...

Edgar G. Gyger, Committee on Publication for the State of New York,—New York

Permit me to refer briefly to the implication, made by a rabbi, wherein he speaks of having noted "constantly increasing propaganda of Christian Scientists." This article appears in your recent issue. The Christian Science movement engages in no form of propaganda as that term is generally used. Mary Baker Eddy, the Discoverer and Founder of Christian Science, uses the word "propaganda" but once in all her writings. She says, "If the individual governed human consciousness, my statement of Christian Science would be disproved; but to demonstrate Science and its pure monotheism—one God, one Christ, no idolatry, no human propaganda—it is essential to understand the spiritual idea" (The First Church of Christ, Scientist, and Miscellany, p. 303). This statement shows the stand she took with her followers upon the question of urging on others their religious beliefs unsolicited. Again, your readers might regard psychology and suggestion as Christian Science, as the rabbi has referred to their use in helping those "that are weak to get themselves together." The truth is, they are quite contrary to the teachings and practices of Christian Science; and both are prohibited by a By-law in the Christian Science Church Manual. They rest upon the theory of many individual minds and the power of one mind over another; whereas Christian Science teaches that there is but one Mind, infinite and divine, called God. Let us strive to be fair, to be just and kindly; for thereby shall the coming of that day, so well expressed in the lines of a favorite hymn, be hastened:

Send a comment to the editors
NEXT IN THIS ISSUE
Article
In your recent issue mention is made of a pastor's announcement... 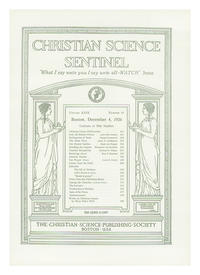