A recent issue carried a brief report of a sermon delivered...

Robert G. Steel, Committee on Publication for the State of Michigan,—Hudson

A recent issue carried a brief report of a sermon delivered by a local minister in which Christian Science was unfavorably criticized. Christian Science, as its name implies, is both Christian and scientific. It is Christian because its teachings are based on the Bible and on the words and works of Christ Jesus; it is scientific because it is systematized knowledge of God and of His law, which has been and is being successfully demonstrated. In obedience to the command of Christ Jesus, and in the same manner and by the identical method used by him, Christian Scientists are healing the sick, overcoming sin in themselves and others, and casting out evil. They believe that Jesus meant exactly what he said in the statement, "He that believeth on me, the works that I do shall he do also." Neither do they forget that the Master set up a standard by which his followers may be judged when he said, "Wherefore by their fruits ye shall know them." Christian Scientists are always glad to be judged by that standard.

What our critic terms "errors" of Christian Science are not errors to those who understand Christian Science teaching. Tearing quotations from their contexts in the attempt to prove critical contentions is certainly neither Christlike nor convincing. A perusal of the entire paragraph from which such quotations are taken usually indicates a very different teaching from that which the critic deduces from his fragmentary excerpts Every statement in the authorized literature of Christian Science is in strict accord with the Bible when that book is understood in the light of Jesus' own precepts and example. Christian Scientists do not attack or publicly criticize the honest religious convictions of others. In commenting on the attitude displayed by clerical critics, Mary Baker Eddy, the Discoverer and Founder of Christian Science, writes on page 55 of the Christian Science textbook, "Science and Health with Key to the Scriptures," as follows: "Now that the gospel of healing is again preached by the wayside, does not the pulpit sometimes scorn it? But that curative mission, which presents the Saviour in a clearer light than mere words can possibly do, cannot be left out of Christianity, although it is again ruled out of the synagogue."

Send a comment to the editors
NEXT IN THIS ISSUE
Article
Being a grateful people, Christian Scientists were naturally... 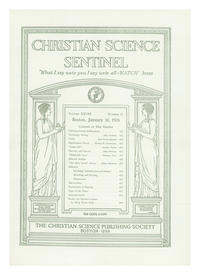