Full-armored , as God's children, we are commissioned to wage a warfare against the evil beliefs that beset the human race, until Soul reigns triumphant. We dare not shrink in the face of the foe; we dare not sheathe the sword of Truth; we dare not sleep at our post. With Pauline conciseness and in clean-cut phrases we find our complete armor set out before us in Ephesians: "loins girt about with truth," "breastplate of righteousness," "feet shod with the preparation of the gospel of peace," "the shield of faith," "the helmet of salvation," "the sword of the Spirit." Is not such armor beyond compare? Its several parts defend against error, sin, unholy and offensive war, fear, destruction.

But Paul says that the struggle is "not against flesh and blood, but against principalities, against powers, against the rulers of the darkness of this world, against spiritual wickedness in high places." And Paul knew, as our Leader, Mary Baker Eddy, the Discoverer and Founder of Christian Science, has emphatically declared throughout her writings, that flesh and blood, in and of themselves, have no power, no reality; that their seeming power is dependent wholly upon the so-called mortal or carnal mind, the counterfeit of God, immortal Mind, which Paul, in his epistle to the Romans, says "is enmity against God." 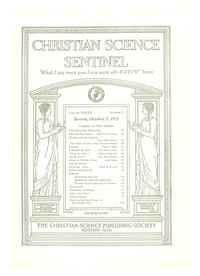