"The manna of to-day"

When the Israelites were being fed with manna in the wilderness, they found that while it was sweet and fresh upon the day it was gathered, the next day it was unfit for use as food. If they would live, they were compelled to go out each day, except the Sabbath, and gather fresh manna. The little that any one gathered was as adequate to his need as the much that a greedier neighbor collected. Thus, greed was not rewarded by an extra supply; nor did the happy, joyful gathering of just enough result in lack.

Do not Christian Scientists sometimes try to make the manna of to-day feed to-morrow's hunger? If to-day's manna has tasted particularly sweet, do they not try sometimes to save it until to-morrow, instead of going out and gathering more? Have not all Christian Scientists had the experience of finding an inspired idea, an angel of God, and of having it overthrow one suggestion of error after another; then has it not seemed to lose its power to quell some new suggestion of error with its original dispatch? Why does this seem to be so? We know that God's ideas do not lose their power. If one inspirational idea, however, be clung to, to the exclusion of others, the user unconsciously limits God, trying to make one idea do the work of the other ideas, fearing perhaps that to-morrow's gathering may be insufficient. God's ideas are unlimited; their inspiration is abundant. Wherever need is felt, there is manna to supply it; and it may be gathered daily. Many times Mrs. Eddy has laid emphasis upon "daily." She has given us the Daily Prayer in Article VIII of the Church Manual (Sect. 4); she has admonished the members of The Mother Church to "daily watch and pray to be delivered from all evil" (Sect. 1); and she has also declared it to be the duty of every member "to defend himself daily against aggressive mental suggestion" (Sect. 6). 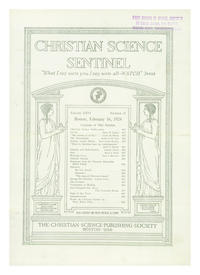