I hereby wish to express my gratitude for all the good...

I hereby wish to express my gratitude for all the good which I have received since I have been in Christian Science. In November, 1917, I quite suddenly had an attack of tonsillitis. I had no fear, but at once refuted the thought of sickness and worked mentally as we are taught to do in Christian Science. By evening the pain was so severe that I was unable to swallow. I also had high fever. I could not resist looking into my throat, which appeared to be in a very bad condition. The right tonsil caused me much pain. However, I did not apply material remedies of any kind, knowing that God could and would help me. The following morning I was still very ill, but clung to the statement, "They that wait upon the Lord shall renew their strength;" and God gave me strength. I was able to get up and attend to the more necessary work. Then I sat down and read in the Bible and Der Herold der Christian Science. By noon I suddenly noticed that the right tonsil was improving. Still, the pain was very intense, and the head ached so severely that I was unable to think clearly. Then I read an article entitled "Man's Birthright" in the May (1917) Herold. As I read the sentence, "When we realize that health is a spiritual fact and in the keeping of God, we find that health never was lost," I suddenly realized that I as God's image and likeness could not be sick at all, since God is the preserver of my health. All pain disappeared and I was healed. I slept very well that night, and in the morning woke up well.

I was deeply grateful for this great proof of divine Love and its all-power. Formerly I was compelled to have a doctor almost every time I had such an attack. I had had several operations on the throat from which I would suffer a fortnight and longer, whereas this time I was healed in three days. I was also healed of grippe in a short time through the help of a dear Christian Science practitioner. Before knowing of Christian Science I was under medical care for almost eight years and took much medicine without getting better. Since my first attendance at a Wednesday evening testimony meeting I have not taken a drop of medicine, and am healthier and happier than ever before.

Send a comment to the editors
NEXT IN THIS ISSUE
Testimony of Healing
From early childhood I was considered very nervous;... 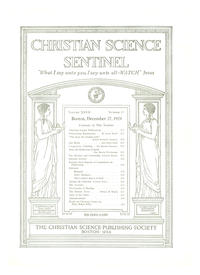