William A. Jeffery with contributions from Lucy Jeffery

I wish to express my gratitude for the many blessings which have come to my family and to me during the last eleven years through the understanding gained from the teaching of Christian Science. In January, 1919, while following my employment, I met with what seemed to be a serious accident. I was helping to move some trees, when one tree slipped and I was pinned down under it, with the lever which I was using across my body. It was some time before my fellow-workmen were able to pull me out from under this great weight; and although I tried to help myself by realizing that "accidents are unknown to God," as Mrs. Eddy says on page 424 of "Science and Health with Key to the Scriptures," the pain was almost unbearable. Later I seemed better; but the improvement was only temporary, and evidences of internal injury followed. I was unable to rest at night, and continued in this state until the following December, when I asked help from a Christian Science practitioner. This was lovingly given; and after two present and two or three absent treatments I was healed. All the trouble disappeared within a fortnight. Several other healings have been received, and I have been able to overcome for myself the ill effects of other accidents.

I should like also to mention a beautiful and instantaneous healing which our daughter experienced in the Christian Science Sunday School. For some days she had complained of acute pain in her right side and of a swelling which had formed. When she left her place of business on Friday evening, it was suggested that an operation would be necessary. The following day she remained in bed; but on Sunday she managed with her mother's help to reach the building where the services were held, and during the Sunday school class she became aware of her complete healing. The pain and swelling suddenly vanished, and she came home rejoicing. The next morning she returned to business, well.

Send a comment to the editors
NEXT IN THIS ISSUE
Testimony of Healing
I became interested in Christian Science nearly seventeen... 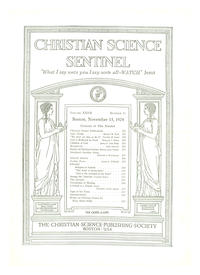