THE Mother Church government is spiritual. The difference between it and civil government might be explained thus. Those of us who are citizens of the United States help to make the laws of our land, and help to elect officers to construe and apply them. We are compelled to live under these laws. We have no choice. But we are not compelled to become Christian Scientists. Right of choice gives us the initiative to go into Christian Science or stay out. If we go into Christian Science, of our own volition we elect to accept its unalterable laws and government, as established by its Discoverer and Founder, Mary Baker Eddy. While this is equivalent to balloting for them, it carries no right to amend. The Mother Church is governed by the divinely inspired Manual, on page 130 of which, in the "Deed of Trust," may be found the provision for a self-perpetuating Board of Directors, as well as in Article I, Section 5. When we sign an application for membership in The Mother Church, we vote for its form of government; and nothing could be more democratic.

Israel was ruled by the law divinely revealed to Moses; but as years passed, that nation became dissatisfied, and commenced to find fault. One can readily imagine the people saying, "Had Moses lived he would have changed many of our laws." Their end was Babylonish captivity. 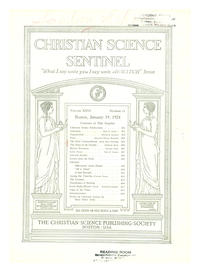