Paul speaks of the "simplicity that is in Christ;" and our beloved Leader, Mary Baker Eddy, tells us in her Message to The Mother Church for 1900 (p. 6): "Any mystery in Christian Science departs when dawns the spiritual meaning thereof; and the spiritual sense of the Scriptures is the scientific sense which interprets the healing Christ. A child can measurably understand Christian Science, for, through his simple faith and purity, he takes in its spiritual sense that puzzles the man. The child not only accepts Christian Science more readily than the adult, but he practises it. This notable fact proves that the so-called fog of this Science obtains not in the Science, but in the material sense which the adult entertains of it." Here we have the so-called mystery made plain. Instead of Truth being abstruse or complicated, the reverse is really the case; and it will be found upon analysis that it is the supposed knowledge of evil which is contradictory, mysterious, and not understandable, because evil, being a negative quality, can never really be known. 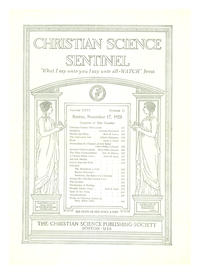