The creation that our physical senses reveal to us is not the real creation. If we are capable of real love, we do not love our brother for the outward form in which he appears before us any more than we love him for the clothes he wears. We love the manifestation of the lovable traits of his character. ... The story of the gospels represents Jesus as a man walking upon the earth, and manifesting the varied and wonderful life of the Spirit as revealed in him. His persecutors came and hung his body upon the cross, thinking that they had thus destroyed him. But no! No part ... of the real Christ had been touched. ... How tersely, fittingly, and truly the inspired words describe the end of the crucifixion, "He gave up the ghost." What had he given up? The ghost,—the unreal, the perishable, the physical. We shall one day ... see that the things of the senses are the unreal things; they perish, they pass away, they are not what they seem; that only the things of the Spirit abide, are eternal. 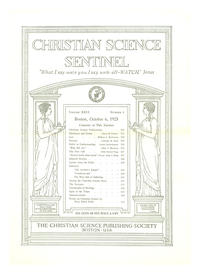