Holding up the Hands

The student of Christian Science does not travel very far in his mental journey without realizing the truth of Paul's statement that we are "members one of another." He soon comes to lose his selfish, personal viewpoint, and views his actions with an eye not only as to how they are going to affect himself, but also in what they are going to contribute to the general good. He reads the Bible and "Science and Health with Key to the Scriptures" by Mrs. Eddy, with a desire to gain a larger understanding not only of how to help himself, but above all how to help others. The Bible is full of instances where self was subordinated for the good of all.

When the children of Israel were journeying toward the promised land, they encountered many enemies who tried to delay their progress. Among these were the children of Amalek, whose name means "warlike." They may well be likened to those erring mortal beliefs which war against Spirit, and which try to hinder us from entering the promised land of spiritual understanding. The command was to "utterly destroy all that they have, and spare them not;" and the Christian Scientist learns very quickly that he cannot compromise with evil beliefs and suggestions, but must follow God's injunction concerning the Amalekites: "Thou shalt blot out the remembrance of Amalek from under heaven." A most helpful lesson of the way this can be accomplished is found in the seventeenth chapter of Exodus. Amalek had made an attack on Israel. Moses took no part in the actual fighting, but sent out the children of Israel under Joshua's leadership. He himself, accompanied by Aaron and Hur, went up to the top of a hill with the rod of God in his hand. Throughout the Scriptures the rod is used as a symbol of rule and authority. In this instance it typified the rule and authority of divine Principle. 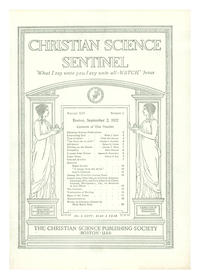