The Grace of Courtesy

A Careful study of the life and teachings of Christ Jesus, as set forth in the four gospels, reveals no instance where his acts did not conform with the highest ideals of character which his disciples and followers have come to attribute to this first and greatest Christian. Gentility, courtesy, purity, humility, obedience, integrity, a fine consideration for his fellow-men,—in short, the entire round of Christian virtues,—found in him their best example. Yet he was by no means devoid of the fire of righteousness, which flared into flame in the presence of manifest dishonesty and hypocrisy. The author of the Beatitudes and of the immortal sentences in which he bade the weary and heavy-laden to come unto him for rest and peace, also accused the Pharisees in terms both scathing and severe, so stern in fact as to leave no doubt as to the severity of his denunciation of his persecutor's hypocritical claims.

The teachings of Christian Science, that is, of Christianity, tend to develop gentleness with its various graces of courtesy in all the relations of life. To know that man, as the expression of God, can possess no attribute underived from his perfect source, divine Love, goes far in rendering human character gentle, courteous, and always considerate for the welfare of others. It is related that the custom of bathing the feet of the stranger, who, usually foot-weary from a long journey, appears as a public guest, is still practiced in certain villages of Palestine and Anatolia, taking its lesson of gentle service and humility from the Master's example to the disciples, on the occasion of the last supper. Many persons in communities claiming a higher degree of civilization and culture could well find a worthy object lesson in this striking example of humble service. 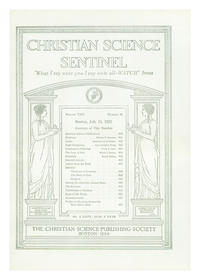